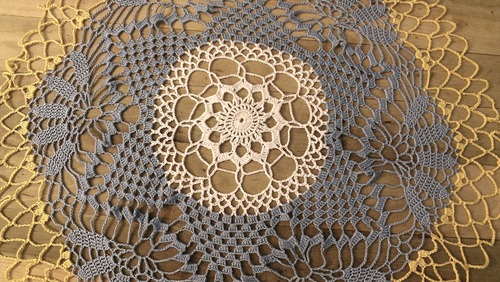 How Not To Sell Your Crafts

So, I had sixteen-some odd hours to burn (haha, no I didn’t, what is wrong with me) and three balls of cotton bedspread thread and a book of vintage lace patterns and I thought, you know what I don’t have? A doily over a foot in diameter. So, now I do. See above.

I finished this piece one hour before I was supposed to be meeting a woman who owned a local gift shop to talk about the possibility of taking some of my pieces on consignment to sell for me, so I blocked it on our mattress and got dressed while Chris ran over it with a hair dryer. (Love that man.)

Trying to Sell Your Crafts at the Gift Shop

I lovingly unpinned it, photographed it for posterity, attempted to get it to delicately fold flat in my bag, gave up and squashed it into a weird pizza slice shape and I was off.

When I finally met the owner, she was sitting behind the counter buried under a pile of sticky two-year-old armed only with a portable DVD player blasting Winnie the Pooh and a glass of red zinfandel, and I smiled, because I’ve been there. Oh, have I been there.

(Except for the Red Zin. My niece is like a grabby little ferret and she’d immediately sense that the red stuff in the glass is the only thing in the whole kitchen that she can’t drink. She would immediately make it her life’s mission to attempt to consume it, and I’d have to explain to her irate mother why her baby smells like she’s been knocking back cocktails at a country club social. That, and I’m more of a Moscato kind of girl. Actually, if they could just make apple juice alcoholic, I’d probably drink that. I’m more of a fan of the idea of booze than the taste of it.)

I laid out my precious wares (on a pile of old receipts and DVD cases,) told her a bit about the three-day-long stint that went into making it, and stood back, smiling hopefully. The kid responded by grabbing the new doily and chewing on it. Ah, a lesser woman than I may have protested, but this is not the first time my lacework has had its seams tested between the gums of a toddler. Chew away, kid, I wove those ends in like a stitch wizard. Instead, I say, “Oh, look, he already likes them!”

She smiles, ponders them a moment, and offers $40. That’s a decent chunk of money, but remember the thing I said at the beginning about the doily taking me sixteen hours to complete? That price would net me about $2 an hour.

Calculate Dollar per Hour When You Sell Your Crafts

Afterwards, the store owner told me that “crafters never, ever get paid the amount of time that they put into it.” She’s not lying. I count as one of the lowest points of my life the time that I got haggled down from $2 to $1 on a beautiful hand made lace wash cloth set. I found myself hoping that my dried-up, over-mascara’ed bargain hunter managed to choke on it as I gave that dollar to the hot dog guy so I could have something to chew on while I wept over the mustard and re-thought my life plan.

So, just so we’re clear, I can make more money rolling silverware or delivering pizzas than I can making doilies and sell crafts to that particular gift shop.

At first I thought I just had a PR problem, and that people didn’t think my doilies were as cool as I did.

I thought that I was a relic of a forgotten age, without having actually been born in that forgotten age. But there are still people who thinks my doilies are really cool. I ended up mounting it on a matte board and displaying it on my wall. I get compliments on that piece all the time. But who has $160 to spend on a doily? If you sell your crafts, you may know of markets where there are folks who do have that type of money, and would be willing to spend it on this. At the time this happened, I did not have access to those markets. I didn’t know how to find them, I didn’t live near them, and I didn’t have time to create enough stock to appeal to them.

I didn’t know my market before I started making product. I was never going to get an amount of money that would make selling that doily worth it. The reason was twofold, by the way. Even if she had offered me that kind of money, I would likely have hesitated to take it. I was too attached to the project, because I had spent too much time with it. I created it in colors that I loved, and I secretly wanted to keep it. There’s no shame in loving your own crafts. It’s really natural to get attached to something you spend so much time with. That’s why, when I make things to sell now, I make things that take little time. I make things that I can duplicate easily, not one-in-a-million pieces of art. That’s the key to sell your crafts.

One Reply to “How To Sell Crafts… at Starvation Wages!”